90 YEARS OF TRADITION, A SOURCE OF TRUE PRIDE!

Our roots are in Stuttgart, where Dipl.-Ing. Gustav Rommelsbacher started his business in the year 1928 with the design and production of loudspeaker systems. He was an inventive genius with innovative ideas and the good instinct for the trends and needs of his time. After World War II, Dinkelsbuehl became his new home. He started his production in a garage, with all materials he could get hold of, and made electric appliances which were urgently needed. Radiators, electric irons and mobile hotplates were manufactured under the brand name robusta and soon they were delivered to several countries. 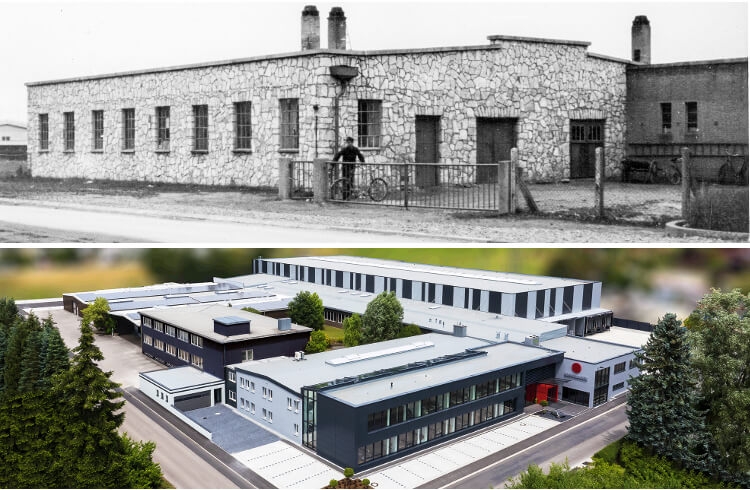 The first brick-built factory was designed and expanded in the years that followed. His son, his daughter and his son-in-law joined the team and robusta became ROMMELSBACHER. In a spirit of great commitment, with high quality appliances and the strengths of a family-owned company, they developed a brand which is well-known for its first class products.

In 1991, the third generation entered the business and in 1995, ROMMELSBACHER moved premises to a larger block of buildings which formed the perfect basis for further growth.

Modernization and expansion started in 2014, making the Dinkelsbuehl premises fit for the future, since the fourth generation is already waiting in the wings.

90 employees with more than 1,000 years of cumulated ROMMELSBACHER know-how develop, design and manufacture high-quality appliances which are Made in Germany and provide ‘Pure Cooking Pleasure’ true to our company’s motto.

We can react flexibly on your requirements and offer tailor-made solutions, which convince not only thanks to functional and aesthetic qualities but also for economic reasons.

We take pride in our 90-year history, our committed team, our family-owned company and our brilliant range of products, which is presented on this website.